“Ben is the badboy of dance” - Armin van Buuren

Ben Nicky is without a shadow of a doubt the standout, record-breaking star on the global trance scene. Having catapulted himselfinto the limelight to transcend well beyond the genre and tattooing his mark on the scene and outselling his peers tobecome one of the most sought-after globe trotting artists and onlinecelebrities, with his social media interaction and viral videos second to none!

Ben’s unique yet recognisable brand which is sportedby waves of adoring fans at his shows worldwide has made him stand out from thepack with his interaction from his young excitable fanbase being one of the keycontributing factors to this meteoric rise through the ranks, becoming a firmheadline artist, selling out his solo shows across the globe and breakingticket sale records in key markets worldwide from the UK right across toAustralia!

Ben’s well constructed, open format DJ sets keep hisaudience locked in, fusing together well known classics with current drops andsounds in his unique Headf**k  mashups,with plenty of twists and turns, yet making it very dance floor friendly,appealing to the masses and turning each set into a unique audio experience.

His viral videos from these encapsulating performancesrack up millions of views online, shared across all social media platforms sothat he is ever present on your timeline, reminding you of the power and globalreach of the Ben Nicky brand!

With his diary undoubtably the busiest in the trancescene, 2017 will see Ben perform at every major festival worth its saltincluding Tommorrowland, EDC Las Vegas and Creamfields, as well as selling outkey venues including Marquee in Sydney and Las Vegas, Avalon in Hollywood,Amnesia in Ibiza and Ministry of Sound in London, not forgetting his firstarena show at the SSE arena in Belfast Northern Ireland to over 9000 peoplethis October! Ben has already oversold many household names to take command ofnew territories in the likes of Northern Ireland where he has become an icon tohis young fanbase, bringing waves of new generations into the scene!

Ben’s hit singles such as ‘Anywhere’ and ‘Hectic’ havebeen signed to the biggest labels on the planet including Ultra, Spinnin,Armada, VANDIT Records and more with chart topping genre crossing remixes forthe likes of Jauz, W&W, Audien, Will Sparks and Paul van Dyk his tracks aresupported across all key global radio shows and stations from BBC Radio 1 toSirius XFM.

Ben Nicky’s online and offline entrepreneurial skillshave pushed him into the upper echelons of world class DJs. If you’ve not yetbeen introduced to Ben Nicky’s sound then you’ve got to ask yourself just onething: why not? 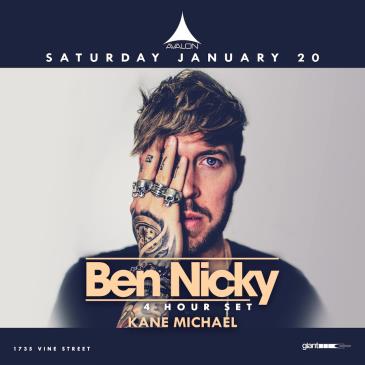