Three years ago, Baths dropped his startlingly beautiful debut, Cerulean. Released on Anticon, the record blurred the line between post-modern pop and the LA beat scene with devastating emotional clarity. Its tone was as celestial as its album title, taken from a shade of blue typically used to describe the sky.

Cerulean earned year-end “Best Of” recognition from Pitchfork and The Onion’s A.V. Club and established Chatsworth-raised Will Wiesenfeld as one of the finest young composers (and falsettos) in Los Angeles. His sophomore album, Obsidian finds him emerging as one of the most complete artists of his generation. As you might expect, the name hints at darker overtones. The mood is shimmering and pitch-black, the lovely blood flow has turned into lava.

“I’ve always been inspired by really dark material and from the beginning I knew I wanted the songs to be much darker, both musically and lyrically,” Baths says.

Following the success of his first album, Baths spent much of the next year touring to progressively larger audiences. He also released an ethereal ambient project under the Goetic name. When he returned home in July of 2011 to record his sophomore effort, he was bedridden for months because of the E. Coli bacterial virus, barely able to digest solid food and bereft of creative energy.

“The songs and lyrics all came out of a pretty fucked and arduous process of trial and error,” Baths says. ”But I hope people understand that I’m not the depressed, suicidal, and death-obsessed person the record may paint me as being. These are just darker areas that I wanted to explore.”

The areas of exploration include reading and research into the Dark Ages and the black plague, different versions of Hell as spied through Dante’s Inferno, the Bible, and old world illuminated manuscripts and paintings. These noirish fascinations met the virtuosic chops of a 24-year old who has been playing piano for 20 years.

“Anything I found that felt like a unique vision of darker emotions or atmospheres, I tried to absorb,” Baths says. “Being a positive and outgoing guy made it that much more difficult getting into that mindset. It was a matter of tapping into that and returning with songs that felt genuine and somehow from my own personal experience.”

This is the power of Obsidian. It combines universal questions with personal pain. On just his second album, Baths exhibits what only a few artists are capable of: painting in any shade they desire. 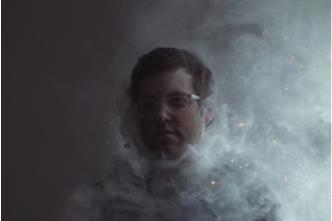