BABERS is a dark pop duo based in LA fronted by Dana Cargioli & Lisa Haagen. Performing live as a five piece, they build from ambient riffs to percussive jams that add a visual element to their live show.  Soft spoken lyrics open the songs like a conversation, but then build to reveal the furthest limits of their individual vocal ranges. Their live show unlocks the brighter side of their moody writing; they are simultaneously heavy & hopeful.

Lou Roy is a multi-genre singer-songwriter who has faith in society to a certain extent and holds joy in the highest regard. Her soft-chaotic debut album set for a spring 2022  release is a journey through personal Mordors and Candylands, sonically grazing the outskirts of pop music. The album will be released in partnership with UK indie label Balloon Machine Records.

From Topanga Canyon, a mountainous LA suburb, Lou has never done anything weird or wrong and is liked by parents around the globe.

Lou isn’t tired or afraid, and has a refreshing take on absolutely everything. For instance, AI is not scary and the climate is doing totally fine - Lou Roy

Her latest release Valkyrie is available now on all streaming platforms - a mid-tempo  alt-pop jam born from a panic attack and tapping on a water bottle. Co-produced with Sarah Tudzin of Illuminati Hotties, the track finds Lou assembling the Valkyrie - a host of female warrior figures in Norse mythology - to kick the ass of those who have wronged her.

Singer-songwriter Ali Coyle has an uncanny ability to create introspective yet relatable indie pop. Her music is best described as cinematic poems, each song taking influence from photographic memories of nature and of the human experience. From self doubt, finding your identity, achieving forgiveness and healing, Ali Coyle succeeds in crafting songs that inspire us all to ask the tough questions to reach deeper meaning. Her EP, Songs for My Therapist, is a stunning blend of indie folk and rock with an infectious pop sensibility. The six-track EP is influenced by her discovery and self-acceptance behind being an openly queer woman and her intense feelings surrounding love, heartbreak and healing

A rock and roll spirit with a soulful tone, Nicole Kiki Jaffe holds nothing back from her audience and leaves everything on the stage. She draws from influences in classic rock, folk, and musical theatre and will be releasing her first studio album, titled ‘Matte Black,’ later this year.

Raised in Southern California, Nicole has developed her sound on stages all across Los Angeles. Grimy Goods has named her a 2020 Artist to Watch and writes, “Nicole Kiki Jaffe transmits pain into beauty and strength. She makes the terrible beautiful and the weak feel powerful. Through her emotive, transparent songwriting, her music carries hope and solace for anyone who listens.”

Buzzbands LA compares her to the Cranberries and says, “Jaffe’s confessionals have been notable for their direct lyrical style, her nimble vocal range and textures that echo some of the strong artists of the 1990s.”

Her melodies are musical cathedrals, with lyrics that both cut and heal. Her songs are fearless reminders that rock and roll was born in the rhythm, and the blues. 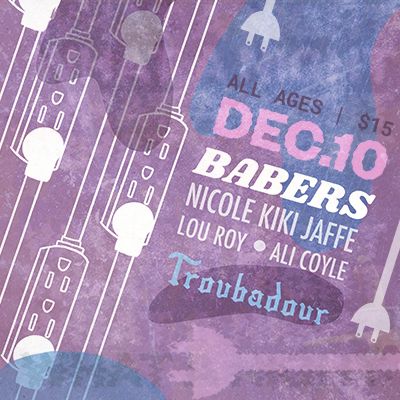