This New Years Eve,we welcome you back to the Shaw Conference Centre for an event of epicproportions.  The world’s biggest DJreturns to Edmonton after two years hiatus to perform on the most celebratednight of the year..  NEW YEARS EVE!

POWERED BY BOODANG & OUR AMAZING FANS.  YOU MAKE IT HAPPEN!

For Tiësto making music is about giving. The GrammyAward-nominated electronic dance music icon offered up his greatest gift yet inthe form of his fifth full-length album and career first for a major label, ATown Called Paradise[Casablanca Records/Republic Records]. That's saying a lotconsidering his track record too…

He's gone from an underground trailblazer to aworldwide superstar who opened the 2004 Athens Olympic Games and was voted"The Greatest DJ of All Time" by Mixmagand the "#1" DJ byRolling Stone. He's headlined festivals around the globe including Ultra MusicFestival,Stereosonic, Coachella,Tomorrowland, and Electric Daisy Carnivaland astoried 20-month residency at HakkasanLas Vegas Restaurant and Nightclub andWet Republic pool at MGM Grand Hotel & Casino. Artists ranging from KanyeWest and Coldplay to Katy Perry and Gotye have personally tapped him forhigh-profile remixes, while Guess and AKG have collaborated with him on afashion line and headphone brand, respectively. Moreover, A Town CalledParadise yielded his first two gold singles in the U.S. with thesingles—"Wasted" [featuring Matthew Koma] and "RedLights"—while a medley from the album also soundtracks a presentation atthe Bellagio fountain in Las Vegas, a first for an EDM artist. With Sirius XM,he launched the "Club Life" channel, nodding to his acclaimedcompilation brand of the same name—now in its third installment.

However, Tiësto possessed a desire to raise the baryet again with album number five, and he sought out what he refers to as the"biggest and best" partner possible.

"I never had the chance to work with a majorlabel before," he says. "I wanted to explore it and, as soon as I metwith Casablanca and Republic Records, I knew it was the right place to go. Mygoal is to make the best music I can and to spread it as far as possible allover the world. They're opening the door for me to do that."

Signing his deal in the middle of 2013,Tiëstoimmediately began working on what would eventually become A Town CalledParadise. He approached the album with a desire to break ground, and hecertainly does that at every turn.

❂ TICKETS ❂
PURCHASE TICKETS FROM AUTHORIZED TICKET OUTLETS.ANY TICKETS DEEMED FORGED OR STOLEN WILL BE INVALID AT THE DOOR.

USE THE HASHTAG #BOODANGNYETO WIN TICKETS! 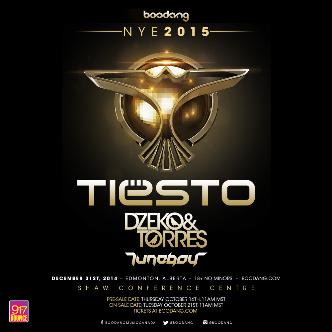