August Burns Red is likely the only metal act ever described as “thrillingly empathetic” (Kerrang!). It’s a testament to the ferocious band’s ability to recognize and connect with the mixture of brokenness and hope found in their audience and within themselves. A hard-working collective with a shockingly stable lineup for the vast majority of their career, August Burns Red pour every ounce of themselves into their music. Atmospheric, riff-laden, aggressive bursts of controlled chaos, filled with shifting time signatures and tempos, deliver confessional,self-reflective, and authentic emotion. Songs like “White Washed,” “Marianas Trench,” “Invisible Enemy,” and“Paramount” are undeniable anthems.

Tour stops with Lamb of God, Killswitch Engage, Parkway Drive, and Bring Me the Horizon; several major international hard rock festivals (Rock Am Ring,Download, and Aftershock, to name a few); and the Vans Warped Tour are among the destinations around the world to witness ABR’s live prowess.

Revolver, who put the band on their coverthe same year, observed August Burns Red “embrace the pain so well.” It’s atruth never more evident than on Death Below, their stunning tenth studio album. Recorded with longtime producers Carson Slovak and Grant McFarland, Death Below encompasses all of the pissed-off strength of the band’s past without sacrificing an ounce of catchy, melodic might.

“It’s getting difficult for the members of August Burns Red to keep one-upping themselves,” marveled Billboard shortly before Guardians arrived. With Death Below, they emerge victorious again. 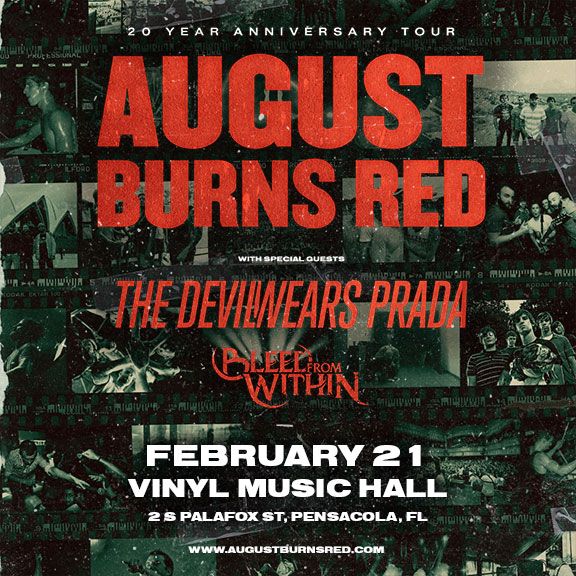 The Devil Wears Prada / Bleed From Within