Hitting all the right notes with fansand peers alike, Russian sensation ARTY is a virtuoso in the dance music world.As an emerging titan in the studio who is simply electrifying in the booth,support comes from all possible corners including world-class artists likeArmin van Buuren, Skrillex, Avicii, Tiesto, Above & Beyond, Axwell, SwedishHouse Mafia, Porter Robinson, and more. From broadcasting behemoths MTV andSiriusXM, to music bible Rolling Stone, and influential tastemakers likeDancing Astronaut, a plethora of press has touted ARTY as one of the biggestrising stars in recent years. With his signing to Insomniac/Interscope Records,he is now set to build upon his flourishing career as he continues to forge hispath and take his place amongst dance music’s elite.

Thegifted youngster first lit up airwaves and dance floors back in 2009 withtracks like “Gentle Touch,” “Get On” and “Flip Flop.” Quickly snapped up by thelegendary Anjunabeats imprint, his relationship with the team behind Above& Beyond has only gone from strength to strength over the last few years.Explosive anthems have proved to be the norm for ARTY as he has produced manycrowd favorites such as “RIOT” with Matisse & Sadko, “Flashback,” “GrandFinale” featuring Fiora, and a pair of Mat Zo collaborations, “Mozart” and“Rebound” — but these are just the mere tip of his rapidly expanding musicaliceberg. ARTY also continues to flex his outstanding remix abilities that haverecently been admired on his hit rendition of London Grammar’s “Hey Now.” It’sto no surprise that ARTY is consistently featured in the sets and radio showsof the figureheads of EDM, while he keeps his own Sirius XM radio show,Together We Are, running strong in between studio time and tour dates. Thisyear, ARTY prepares for the release of his debut album with its first single,“Up All Night” featuring Angel Taylor.

Whetherit’s deep in the darkened, thundering bosom of club land or in front of tens ofthousands on the laser-lit stages of Ultra Music Festival, Electric DaisyCarnival, Global Gathering, Electric Zoo Festival, Fallout Festival and more,his spellbinding sets have cemented his status as one of the most sought-afterartists anywhere. From North America to South America, across the seas to theshores of Europe, Asia and Australia, this burgeoning talent has harnessed theattention of the new dance music generation and seasoned veterans. The chantseized on by fans says it all — there is “no party without ARTY.” 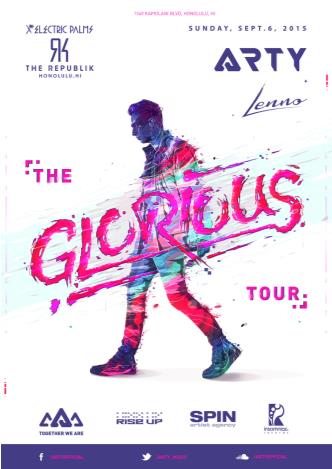