His fellow producers call his music "taste-making" and "revolutionary", as The Pitcher is one of Fusion's big league artists.

With one of the Donkey Rollers producers at the helm, The Pitcher has already scored a number of hits, such as the classic "Pump It Loud"and "I Just Can't Stop", later covered by the German techno band Scooter.

In 2011 Luc van Veghel's debut-album "Smack" won the Hard Dance Award for best artist album. The large success of his first album has proven he is one of the strong forces within hardstyle these days.

What makes The Pitcher different from others hardstyle DJ's is his versatility as a DJ. The Pitcher knows how to capture the audience, as he so effortlessly proved with his legendary Defqon 1 set.

A master when it comes to winning over the crowd, The Pitcher never forgets what it's all about: "ENJOY THE MUSIC!"

After eight years in the North American EDM scene, Lady Faith has brought her unique stage presence and exemplary mixing skills to some of the biggest events in the country. Headlining alongside Angerfist, Atmozfears, Caffeine, Darksiderz, Dash Berlin, Donkey Rollers, Frontliner, Headhunterz, Isaac, Noisecontrollers, The Pitcher, Wildstylez, Zany and Zatox - she has quickly become a household name. With events throughout the United States, Canada, Australia, and Europe under her belt, she has set her sights on bringing American Hard Dance to fans across the globe.

With a unique blend of Persian sounds and pounding kicks, her tracks, "Donyaye Man", "Pleasure & Pain", "Carmen", "Rising High", "Moxie", "Queen Bitch", and "Disko Nights" have all been well-received by the Hardstyle community worldwide. With every new track, this flourishing hard dance storyteller will share more of her musical vision with the world. Be prepared to experience the unexpected and remember to always have FAITH in the sound that is Hardstyle!

Darksiderz descend upon us from the far reaches of the unknown. He brings a powerful sound of exclusive hard beats that will control both your mind and your body once you step onto the dance floor. He is a powerhouse behind the decks and in the studio with influences ranging from hard dance to industrial to death metal. He has combined different sounds to spawn a new hard EDM concept and the world will soon know the power of the darkside. 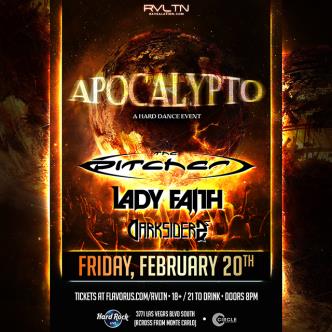