Aparna started out doingcomedy in her hometown of Washington D.C. and now resides in New York City.2016’s Elle’s Women in Comedy Issue,featured her as one of the most exciting new voices to hit the comedy scene.She is a series regular in the debut season of Comedy Central’s Corporate and has reprised her role inseason 2 of HBO’s CRASHING. Aparnais also featured in the second season of Netflix’s The Standups. Other television credits include Netflix’s Master of None and LOVE, HBO’s High MaintenanceComedy Central’s Inside Amy Schumer,appearing as a US correspondent for Dave’s (UK) Unspun with Matt Forde, and Hulu’s I Love You, America with Sarah Silverman. In 2018 she makes herfeature debut in the Paul Feig movie A Simple Favor.  HerTV stand up appearances include Seeso’s stand up series Night Train with Wyatt Cenac, season 2of Comedy Central’s Meltdown as well as Adam Devine’s House Party. In 2013,she made her late night stand up debut on TBS’sConan andwas one of the breakout New Faces at the prestigious JustFor Laughs Festival in Montreal. Her TV writing credits include Late Night with Seth Meyers as well as being a regularcorrespondent/writer on FX’s TotallyBiased with W. Kamau Bell.  She isalso an alumna of the NBC Stand Up for Diversity program and currentlyheadlines throughout the world and has been seen at a number of festivalsincluding Comedy Central’s Clusterfest, Portland’sBridgetown Comedy Festival, Moontower, SFSketchfest, DC’s Bentzen Ball, Outside Lands,Bonnaroo and Dublin’s Vodaphone Comedy Festival.Aparna’s been featured on and in NPR, Reader’s Digest,The Huffington Post, The Washington Post Magazine,XM Radio, and Slate V. She can regularly beseen performing at the Upright Citizen’s Brigade’s in LA and NYC. Her debut album JustPutting It Out There was released in July 2016 by Tig Notaro’s label BentzenBall Records and hit the #4 on Billboard Comedy Charts. 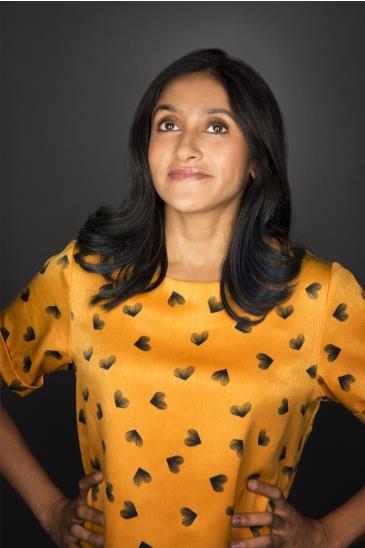