Local Comedians will compete for the crown with their best Drag Lip Sync & Standup Comedy along with a Q&A Bikini Contest that is sure to Jingle Your Bells  Roast Your Chestnuts and Put a Partridge in Your Pear Tree. Bring Dollar Bills to Tip the Queens!

Dr. Anna Lepeley is a Nationally Touring Headliner and has her Masters in, Quite Literally, BEER! Yes, Anna has authored the hit book Beer is Good For You and travels the country doing both comedy and seminars regarding the health benefits of beer. She has toured the nation with her Comedians in Drag Doing Comedy Showcase and has been universally loved by audiences far and wide.

Andrew Ferrara aka “Shehourney Weavehair”Born in Brooklyn, but Bible Belt Bewildered- Andrew Ferrara is the founder of YIKES Comedy in Pensacola and producer of the P3 Comedy Fest. He has performed in clubs all over New York City, including The Stand, Broadway Comedy Club, & Comic Strip LIVE and has toured Nationwide. Andrew was a Best of the Fest finalist in the Palm Springs International Comedy Festival in California and was featured in the NY Queer Comedy Festival as well as the San Diego Comedy Festival. Two Time Winner of inWeekly Magazine's Best Comedian- Andrew Brings High Energy and an Animated Style to the stage that keeps the audience rolling with laughter.

He slays the stage as the Spontaneous, Space Queen Shehourney Weavehair. Shehourney is a two time champion and the current Reigning Miss Pensacola. Her body is out of this world and her booty is ever expanding just like our universe. She May Not Be From Earth, but She Comes in Peace. She’s Here. She’s Queer. Shehourney.

Andy Honaker aka “Ivana Edict”Andy Honaker lives in Alabama, hails from the mountains of Virginia, and calls Pensacola his comedy home. He is seen by many in the Pensacola Comedy Scene as the grandfather they never wanted. Andy wants you think he’s younger than what the calendar wants you to believe, and is very loveable on and off the stage. This guy never meets a stranger. He is a Comedian, Architect, Teacher, Published Poet and an example for those living with an invisible illness, severe migraine disease. An old soul with the mind of a man much less mature, he’ll make you laugh and disrespect your elders at the same time.  His delusional sense of humor is broken and ‘slightly’ bent, but in the right way.
Andy’s drag persona, Ivana Edict, has appeared in several comedic drag shows and stages on the Gulf Coast. She is exactly what you would expect of a matronly German seductress. Her hobbies include shaving her back, and also volunteering her services at retirement homes, and sexual addiction clinics. Ivana wants nothing more than to make you laugh.
Delisia Nicholas aka “Sir Lickolas”Delisia Nicholas is a storytelling, pig wrangling, crowd pleasing comic that will have your eyes welling up with tears from laughing so hard! This Gulf Coast Favorite and Pensacola Native has hit the ground running, traveling all over the Southeast bringing the funny to stage after stage. She is an Official Performer for the 2022 Altercation Comedy Festival in Austin Texas and has performed at the DesComedie Festival and AlaskaB4UDie Fest. On top touring, Delisia also Co-Hosts the Weekly Open Mic at Big Top Brewing Company in Downtown Pensacola.
At the 2021 P3 Comedy Festival, Delisia became the first woman in the history of Anna Lepeley’s Comedians in Drag Doing Comedy Show to win the crown. Delisia transforms into the smooth, sexy, blinged out pimp daddy- Sir Lickolas. This king knows how to treat a lady like a queen. Sir Lickolas will take you to dinner and while you aren’t looking slip ten grand in your purse cause you’re worth it girl. Hell- he even bought you that purse. Sir Lickolas just wants to spoil you, at the mall, on stage, and in the bedroom.

Ryan Pfeiffer aka “Thin Mintz” Ryan Pfeiffer has been hustling in the entertainment biz since the mid-1990s. The comedian, podcaster, actor, and writer started his stage career with the North Georgia Theatre Alliance, performing the role of Seymour in "The Little Shop of Horrors." He then moved to Chicago where he performed at Steppenwolf, Chicago Shakespeare, The Royal George, Bailiwick Repertory Theatre and appeared in tons of avant-garde productions including The Wizard Of AIDS, Animal Farm the Musical, and The Bombitty Of Errors. He was also the host of the Emmy Award winning TV show "Up And Running" which ran locally in Chicago and Denver until the studio was converted into a car lot. In Hollywood, he’s performed at the Comedy Store, Hollywood Improv, Improv Olympic and was the host and co-producer of the long running stand-up show Bomb Shelter. Ryan has been featured in a Super Bowl commercial where he got to act with penguins. Sadly, the ad was 86’d and never aired, but he was still paid. Since 2012, he’s hosted the CrabDiving Podcast. Currently, Ryan produces Sunday Afternoon Live, AKA “The Hangover Show,” a monthly improv, comedy and music show at A Little Madness Brewing Company. You can also see him Tuesdays at Whiskey Runners Saloon near UWF hosting The Rated R Comedy Show.
Ryan makes his Drag Debut at Vinyl as the oh so delectable Thin Mintz. Everyone loves her cookie and she will let anybody have a taste. And though she likes to get dirty and chocolate dipped, Thin Mintz will leave you feeling freaky fresh.

Event is 18+ * Additional $5 Cash Surcharge At The Door For Under 21 * General Admission- Seated And Standing Room Only * Seated Tickets Will Be On A Strictly First Come/ First Serve Basis * However A Seated Ticket Guarantees You A Seat In The Selected Seating Area * Lineups and times are subject to change * Any ticket suspected of being purchased for the sole purpose of reselling can be canceled at the discretion of Vinyl Music Hall and/or SeeTickets * No refunds - No exceptions * No re-entry. 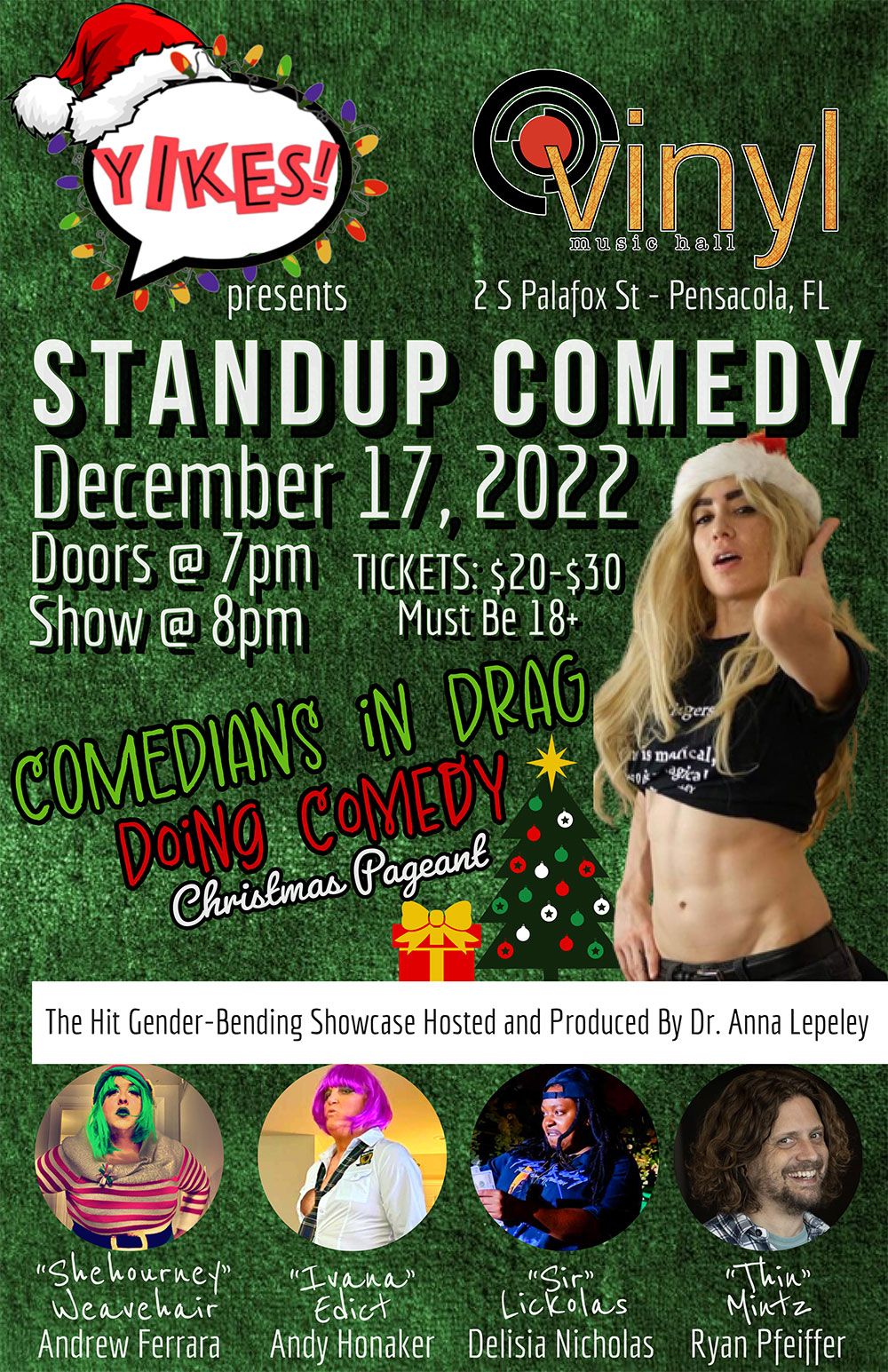