By the age of 27, English Jazz and Soul singer, Amy Winehouse, had the best-selling UK album of the 21st century, was the first British Female to win 5 Grammy Awards, and sold over 3 million albums worldwide.  Tracks from the Back to Black album came off like lost classics from the 50s and 60s but Amy’s sultry lyrics and bad-girl attitude kept her sound original and fresh.  Matching Amy’s touring outfit while she was being backed by Brooklyn’s Dap Kings we put together a 10-piece SUPERBAND complete with keys, brass horns, and backing vocals.  Under the musical direction of Mark Lindberg, a score of Honolulu’s favorite soul singers including Paula Fuga, Yoza, Melodie Soul, Big Mox, Erin Smith, Kahnma K.,Candy Diaz, Erika Elona, Melanie Ilana, Jenna Kealiikuli, and Maryanne Ito will be belting Winehouse’s hits like “Rehab,” “Back to Black,” and “You Know I’m No Good.”

Also performing will be Indie-Soul band from Chicago, JENNIFER HALL.   Named an “artist to watch” by Chicagoist, Jennifer Hall’s vocals are powerful and sincere.  Combining influences such as Patsy Cline, Jeff Buckley, and Ella Fitzgerald, Jennifer is considered the love child of Norah Jones and Neko Case. After releasing a critically praised EP, Hall immediately embarked on a North American tour while sharing stages with both Eddie Vedder and Tom Morrello.

KINGS OF SPADE is a high-energy, foot-stomping, shameless dancing Blues/Rock act from Hawaii.  2015 proved to be their busiest year of touring getting booked from Showare Arena’s Rock-A-Thon in Seattle to the Chance Theatre in New York.  Their latest self-titled album was nominated for Hoku Hanohano Award’s Best Rock Album of the year and they were voted Best Local Rock Band in 2014 & 2015 by Honolulu Pulse readers. 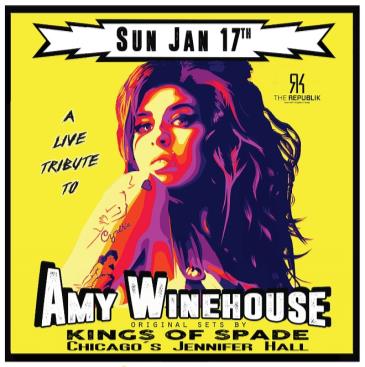