PAPER DIAMOND ­ Alex B (Alexander Botwin), better known as Paper Diamond is an American electronic music producer from Colorado. He signed with Pretty Lights Music in December 2010, and released his first album Levitate on January 25, 2011 History: Botwin started out as a bassist for the dance music Pnuma Trio in 2004 before becoming an owner of a record label, design company and store owner under the name Elm & Oak in downtown Boulder, Colorado. After Pnuma Trio he began his solo career as a DJ under the name Alex B which has become Paper Diamond as of 2011. After the release of Levitate, his first full length album, in 2011, he began to play shows and festivals around the country. Starting in 2012 with a US tour that saw him hit the road with The M Machine, he continued on to play the Coachella Valley Music and Arts Festival more commonly known as Coachella a festival that takes place in April in Indio, California. After Coachella he played Electric Forest Festival in Rothbury, Michigan in June 2012. He then played Lollapalooza Music Festival in Chicago, Illinois Grant Park (Chicago) in early August 2012 before Heading to New York City to play Electric Zoo Festival at the end of August 2012

on Randall's Island. He is scheduled to play Bonnaroo Music Festival in June 2013 in Manchester, Tennessee.

ALVIN RISK ­ Singer and producer Alvin Risk’s talents have earned him instant recognition amongst the dance music Illuminati. Since posting his first songs just months ago, he has already garnered support from artists like Skrillex,

Designer Drugs, and Steve Aoki, even featuring in Pendulum’s BBC Radio One Essential Mix. Now placed at the forefront of electronic music, his catalog continues to grow steadily with

a host of original productions and collaborations as well as remixes for artists as diverse as Matt & Kim, Ali Love, and Jamaica. He has also recently released the highly anticipated ‘Two Strokes Raw’ EP on Plant Music.As for what is next, Alvin Risk has no intentions of letting up. This unpredictable artist will continue to innovate, challenge and defy expectations. The future may well see him return to his roots as the front man of an electronic rock orchestra. 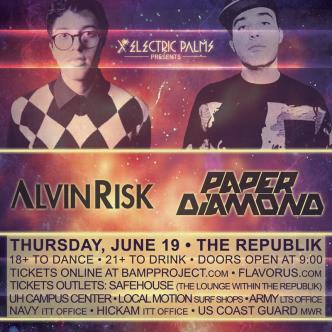