All ages welcome!
Tickets available online or at the bar!

Airbourne manage to call upon the spiritual substance of Thin Lizzy, the gritty pub-crawling vibe of Motörhead, the grandiose histrionic theatricality of Judas Priest, the unifying audience domination of Iron Maiden and the sharp bite of their fellow Australians in the legendary AC/DC. They’ve stitched together these disparate components into a head-banging Frankenstein monster of their own creation, energizing the entire hard rock scene with their enthusiasm and relentless drive.

Airbourne formed in the band’s hometown of Warrnambool, Victoria, 10-years ago. Their first album Runnin’ Wild was one of the most talked-about and best-reviewed debuts in recent rock history, winning the band a Metal Hammer Golden Gods Award for Best Debut Album.

The band has since released No Guts. No Glory. and their most recent album, Black Dog Barking, which debuted at #17 on the ARIA Albums Chart. The album has also been extremely successful around the world, charting in the top 30 of many countries, including #5 in Germany, #9 in Switzerland and #11 in Austria. 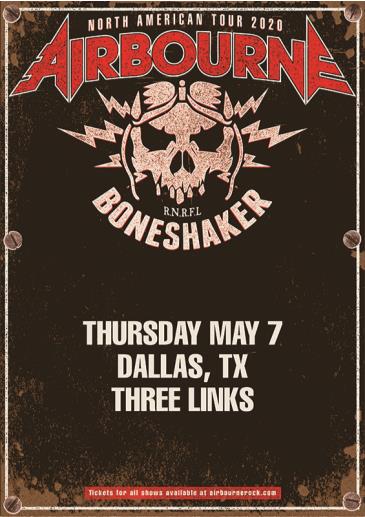