Born July 29, 1974 in Palmdale, California. Joseph Foreman, better known by his stage name Afroman, is a Grammy nominated American comedy rapper who came to prominence with his singles "Because I Got High" and "Crazy Rap". Initially unknown when beginning his career, his song "Because I Got High" circulated around the Internet before becoming a hit worldwide. He was nominated for a Grammy award in 2002. He began rapping in the eighth grade, and in his church he played drums and guitar. For a short time, he worked as a baggage handler at an airport. In 1999, he released his first album, Sell Your Dope; he later relocated to Hattiesburg, Mississippi, where he met drummer Jody Stallone and keyboardist/bassist Daryl Havard. He released his second album Because I Got High (album) in 2000; it initially was distributed primarily through concerts and the file-sharing service Napster before its title track was played on The Howard Stern Show. Afroman based the song's lyrical content on his inability to clean his room; the lyrics outline that drug use affected his ability to do basic everyday life tasks. In late 2001, the song became a worldwide hit and was featured in the films Jay and Silent Bob Strike Back, The Perfect Score, and Disturbia later in the 2000s. Additionally, the song is still in the Top 10 on Billboard's "Hot Ringtones" category, having been on the charts for over 190 weeks. Because of the single's success, Afroman joined the lineup of Cypress Hill's fall festival Smoke Out with Deftones, Method Man, and others. Universal Records signed Afroman to a six-album deal; Universal released The Good Times in 2001, a compilation of Afroman's first two albums and some new tracks. "Because I Got High" was nominated for the Grammy Award for Best Rap Solo Performance in 2002. Starting in 2004, Afroman released his music independently and mostly through the Internet. He recorded a comedy album that year, Jobe Bells, mocking traditional Christmas songs. 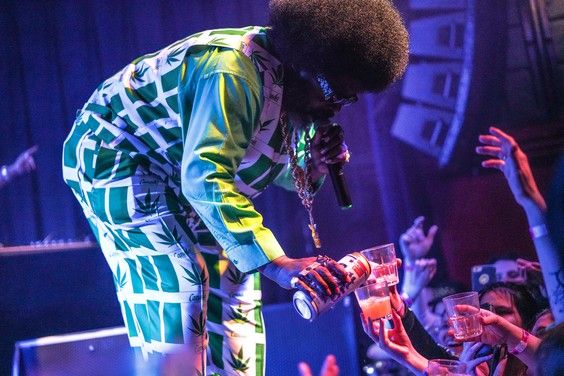