The Afrofunk Experience is an ambrosial mix of musical interpretations influenced by the African diaspora, created in a collective and organic manner. With Sila Mutungi they comprised the award-winning group Sila and the Afrofunk Experience until 2010, providing songs and grooves that earned them the title "The Bay Area's Dance Kings", as well as the NAACP Image Award's Outstanding World Music Album for "Black President" and the SF Weekly Music Award's Best International Act.

Note: There once was a man named Mike Pitre ... he was the coolest cat, with the craziest degree of swing, in his trumpet playing, in his singing and in his living.  Mike passed away just weeks after he recorded his parts for the AFE album.   He would cuss the band out if they were to quit.  So they roll on.  And they miss him.

DJ Loisaida is originally from the Lower East Side of Manhattan now living in NorCal's Sonoma County. born and raised in the Lower East Side of NYC. Spanglish nickname, LOISAIDA, refers to the world famous neighborhood of the Lower East Side known for Culture, Arts & Music. DJ Loisaida has warmed the room for: Afrofunk Experience, Afrolicious, Harrison Stafford and the Professor Crew, President Brown, Jr. Toots, Zulu Spear, Onye & The Messengers, and many more "
https://www.mixcloud.com/ronaldwoodman/ 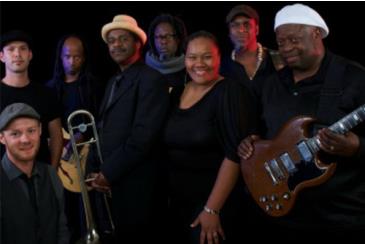