Swedish based Grammy nominated (2011) producer Adrian Lux, best known for his highly acclaimed single ‘Teenage Crime’, is back with another smash hit ‘Boy.’ Featuring vocals from Swedish sweethearts Rebecca & Fiona, ‘Boy’ released on Ultra Records June 27th, 2011.Similar to his previous singles ‘Strawberry’ and ‘Can’t Sleep,’ Adrian Lux delivers a complete experience on ‘Boy,’ seamlessly transitioning between genres as an anthem of summer love and a more serious track, revealing his growt h as a producer.Exposed to music at a young age, Adrian Lux is the son of two

musicians. His professional career in music began as a teenage prodigy, earning fame as one of Stockholm's leading hip­hop & reggae DJs. Though the transition to spacey, sentimental dance pop that Adrian currently creates seems huge, it was a completely natural progression for the young producer. With one foot in the suburb where he grew up and the other in the pulsating Stockholm nightlife, Adrian Lux meshes his worlds through music. Adrian creates sounds that are often described both as minimal and grandiose. His music built its foundation on the dance floor, with a teenage whimsy attached to it. Blowing up European dance floors for over three years, it’s never mat t ered what kind of club or crowd t hat is

in attendance ­ techno, house, or indie; they all adore Adrian Lux. With ‘Teenage Crime’ certified Platinum in Australia and Adrian receiving worldwide DJ support from the likes of Tiesto, David Guetta, Avicii, Max Vangeli, Ferry Corsten, Sander van Doorn and more, all eyes are on this rising star. Recent remix work includes Britney Spears, Natalia Kills, Roger Sanchez, the TRON soundtrack, Miami Horror, PNAU and more. Adrian has toured the US with Tiesto, and is currently embarked on a 2011 worldwide t our including Ult ra Music Festival, Beyond Wonderland, Ibiza, Australia’s Parklife, with dates through Europe, UK, Scandinavia and more. 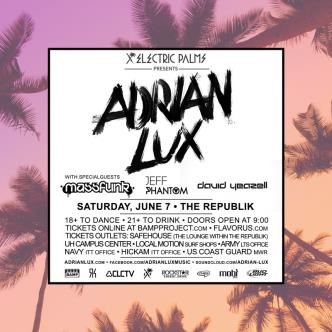