Las Vegas rockers Adelitas Way found mainstream success in 2009 with the song "Invincible," which appeared on their eponymous major-label debut and served as the theme song for the weekly World Wrestling Entertainment Superstars show. Standing at the nexus of post-grunge, alternative metal, and hard rock, the band issued two more LPs with Virgin before going the independent route with the release of 2016's Getaway, which like subsequent efforts Notorious (2017) and Shine On (2020), arrived on the group's own Vegas Syn label.
Home School Valedictorian Formed in the late 2000s by lead vocalist Rick DeJesus and lead guitarist Chris Lorio, the band (which also included rhythm guitarist Keith Wallen, bassist Derek Johnston, and drummer Trevor Stafford) released its eponymous debut on Virgin Records in July 2009, which included the aforementioned hit single "Invincible." The band's sophomore effort, Home School Valedictorian, arrived in summer 2011 and featured new lead guitarist Robert Zakaryan after Iorio left the group within five months of their debut's release. At the end of 2012, writing began for the band's third album, while only six months later, Keith Wallen and Derek Johnston announced that they were leaving. In July 2013 the group entered the studio with Grammy Award-winning producer Nick Raskulinecz to record Stuck, which was released the following year and featured the hit single "Dog on a Leash," which peaked at number seven on the U.S. Mainstream Rock Chart. 2015 saw the arrival of the Deserve This EP, and the following year, the band released Getaway, their fourth studio long-player and first outing for their fledgling indie label Vegas Syn. 2017's Notorious included the singles "Tell Me" and "Ready for War (Pray for Peace)," the latter of which served as the theme song to TLC: Tables, Ladders & Chairs, a WWE pay-per-view event. June 2020 saw the arrival of the driving single "Shine On," which appeared on the LP of the same name later that September. 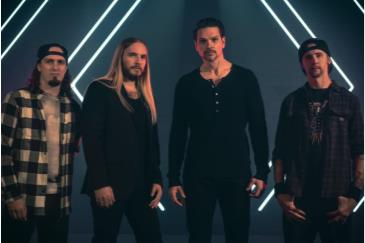