Adam Ant & The Good, The Mad, and The Lovely Posse

The concert hall opens at 7pm for all ages accompanied by an adult.

one of the most recognized faces of the80s who has sold over 40,000,000 records. His massive, global

“Wonderful” have crowned charts worldwide(At one point, he had eight singles in the global Top 40

charts in one week). He also delved intoan acting career with film/TV roles including “Nomads”,” Love

Bites”, “Slam Dance”, “The Equalizer”, “SledgeHammer!”, “Tales from the Crypt” and later penned his

After sold out USA and UK tours in 2012,Adam has just released his new album “Adam Ant is the

Blueblack Hussar in Marrying the Gunner’sDaughter”. The album, a musical autobiography with 17

musical stories about his life and thingsthat interest him, debuted at #8 on The Official Chart in the UK

and climbed to #3 on the UK Indie AlbumsChart. Now, with his band, The Good, the Mad and the Lovely

Posse, Adam is preparing to cross the pond againwith a massive 2013 tour. 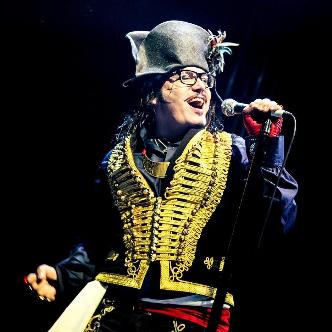 Adam Ant & the Good / the Mad & the Lovely Posse