If it sounds like Aaron Lewis is long past defending his Country music pedigree, that would be a correct assessment. Lewis would prefer the music speak for itself and, with the release of SINNER, Lewis’ stunning Dot Records follow-up to his groundbreaking full-length solo debut The Road in 2012, any would-be detractors will be pretty much out of ammo.  Lewis, however, is not. SINNER blasts through today’s Country music doldrums like a shot of 100-proof whiskey, with the singer making zero compromises with either himself or the restrictions of a format that seems to have abandoned its rougher tendencies in favor of pop and ‘70s rock inclinations largely lacking in grit.“I’d like to think that SINNER is a newer take on classic, traditional Outlaw Country, Waylon and Merle and Willie, and Hank Jr. and Johnny Cash and all that stuff,” says Lewis. “That was the music I heard as a kid, and that’s the Country music that permeated my soul and stuck with me my whole life.  ”Lewis admits he “didn’t really pay attention to any of the Country music in between” that early Outlaw exposure and his emergence as a new voice for the genre with the release of “Country Boy” on the Town Line EP in 2011. “I was too busy going down the road of one day ending up being in a rock band, and revolting against the music I was basically force-fed as a kid,” he says. “I finally came around full circle, and this music crept back into my life. My plumber at the time bet me that I wouldn’t write a Country song, so I sat down and wrote ‘Country Boy,’ and the rest is history.” 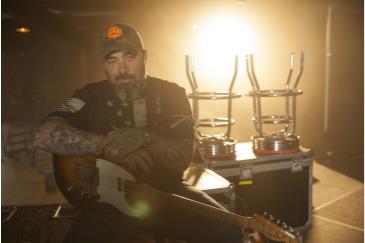