Most people know Aaron Lee Tasjan as one of the wittiest, most offbeat, brilliant, weed-smokin’ & LSD microdosin’ Americana troubadours writing and singing songs today. And the New York Times, NPR and Rolling Stone will all gladly corroborate. But steel yourselves, folk fans, because he’s about to follow his restless muse straight out from under the weight of everyone’s expectations into the kind of glammy, jingle-jangle power-pop- and- psych-tinged sounds he hasn’t dabbled in since his younger days playing lead guitar for a late-period incarnation of The New York Dolls.

Really, the roots of Tasjan’s new record, Karma for Cheap, stretch even deeper, drinking up the sounds of a Southern California childhood spent listening to The Beatles while riding around with his mom at the wheel of their navy blue Volvo station wagon—back to the very first pre-teen year he picked up a six-string and started figuring out all the pretty little chords in those Lennon-McCartney tunes. Back to the pure, blissful unfiltered innocence of falling in love with music for the first time. But more on that later. First, let’s ponder the brutish realities of the American Swamp.

Aaron Lee Tasjan says he aims to use his music for good, but he’s no protest singer. And Karma for Cheap isn’t some heavy-handed, didactic political record cramming a set of talking points down anyone’s throat. It’s a finely tuned rock & roll seismograph measuring the dark and uncertain vibrations of the time in which it was created. A cracked mirror reflecting back the American zeitgeist in this foul year of Our Lord, Two Thousand and Eighteen.

“When you’re a songwriter,” Tasjan says, you’re dealing in truths and untruths—that’s part of your commerce as a citizen of the world. And anything coming along that’s threatening to blur that line is a threat to your livelihood as a working American.”

Take it from Tasjan and Karma for Cheap, being a songwriter in the post-truth world of Trump’s America ain’t easy. Tasjan valiantly wrestles with this new normal in songs like “Set You Free” (“it’s a smokescreen scene and nobody knows what’s real”—fake news!) and “The Truth Is So Hard to Believe.” What will we do when we can no longer map the line between fact and fiction? When we exist in a world where the truth is unknowable and we’re at the mercy of liars and charlatans? “Hearts in chains and hands are off the wheel,” Tasjan sings in hypnotic staccato, tapping the collective cultural anxiety of all the rattled millions drifting off each night to a new American dream, one in which we’re all in a big red, white and blue camaro fishtailing down some winding tree-lined road in the bible-black dark, white-knuckle-clutching the oh-shit bar, accelerator glued to the floor and not a soul in the driver’s seat.

“The sound of this new record is a little more rough and ready, more raw than anything I’ve done before,” Tasjan says. “Seems like a good time for it. We’re living in a pretty raw feed right now, and a lot of these new songs reflect that. They deal with with being stuck in the deluge of horseshit every day. On social media, you see people suckered into getting all irate over some post that, in the end, turns out to be completely fake. We have to be aware of these mindsets, these traps and emotional pitfalls that send us spinning. Music for me is a comfort thing. And I’m trying to sing about all this to remind myself not to get caught up in the game. There are a lot of people out there carrying the burden of this weird, twisted world we’re living in at the moment on their shoulders. So I tried to write a record that offers some comfort, encouragement and hope to those people, as much as it’s possible to be hopeful right now.”

While the stylistic shift from Tasjan’s palpably stoned ‘70s-country-channeling 2015 debut, In the Blazes, to his more sophisticated, introspective and lushly produced 2016 follow-up, Silver Tears, was relatively incremental, Karma’s rocked-up Brit-pop-influenced Beatles-Bowie-Badfinger vibes underscore a significant departure. The album boldly reminagines these vintage sounds, pushing the boundary of what can be considered Americana. With Karma, Tasjan establishes himself as an artist who not only evolves over time, but isn’t afraid to risk reinventing himself completely from one record to the next.

“It’s always a goal for me to be able to not listen to the part of my brain that cares what other people think, and just do something really pure and from the heart,” he says. “I needed this album to have a sense of adventure and mystery, to feel a little shaky and dangerous at times—something that wasn’t the obvious choice in terms of what people already like about what I do. I’ve come to realize that I’m a searcher, which means I’m going to be searching forever.” Aaron Lee pauses and laughs at the notion, and what’s in store for the rest of his life—ticket bought, ride in progress. “Yep, this is never going to end,” he says. “No oasis, no safe harbor to stop and say, ‘Well, I’ve gotten here, and now I’m good.’ In some ways it’s a harsh realization—living in that type of headspace can cause a lot of turmoil. But if you can find beauty in the mundane… well, there you go. I’ve definitely been making more of an effort to enjoy the journey.”

For all the album’s wrestling with social and political discord and the stresses of modern life due to the grand experiment of social media and the unforgiving tractor beam of the world-wired-web, Karma for Cheap finds its silver lining in the innocence of a wide-eyed kid’s maiden voyage into the electrifying thrall of rock & roll. The heaviness of the lyrical content is tempered by the joy and wonder of an artist reconnecting with what made him fall in love with playing music in the first place. The sound of it, the way it made him feel when he was 11 years old and it was all still as new as a fresh coat of spray paint from the can of some smug delinquent. That was 1997—the year Tasjan moved from Ohio to California, and scored his first guitar and a stack of iconic CDs by The Beatles, Oasis and Tom Petty.

A huge sonic touchstone for ALT’s new record is The Beatles Anthology, one of his childhood favorites. In songs like “If Not Now When,” “Song Bird” and “The Rest Is Yet to Come,” you can hear echoes of George Harrison’s vibrant guitar riffs and Jeff Lynne’s lavish production on those lo-fi John Lennon demos the surviving Beatles dug up and polished off in the mid ‘90s. “‘Free As A Bird’ and ‘Real Love’—those were my jams when I first started playing guitar,” Tasjan says. “I was learning those and a lot of other Beatles songs. And then Oasis came out with ‘Wonderwall’ and I was like, oh that’s The Beatles for my generation, and I became obsessed with them, too.”

Perhaps the most poignant moment on Karma for Cheap is the anthemic, hypnotic “Heart Slows Down,” a tune rife with musical and lyrical references to the Beatles and Tom Petty, anchored by an unforgettable chorus with a Traveling Wilburys vibe that finds the sweet spot between Tasjan’s two earliest musical heroes. “When I was a kid, my favorite CD to fall asleep to was Tom Petty & the Heartbreakers’ Greatest Hits, and the last song is a cover of that Thunderclap Newman song ‘Something in the Air.’ From the time I was a little kid to when I was teenager, I used to listen to that song on headphones almost every night—I heard it in that space between wake and sleep so many times. And Tom’s passing—he was a really big hero of mine, so it hit me pretty hard. We were in Seattle playing a show when I heard, and it was a heavy thing to process. But all of those elements are there in ‘Heart Slows Down.’ The chorus, ‘I will always be around,’ is a reminder that all the good you ever got out of listening to this music is still around you. You’ll always have that.” 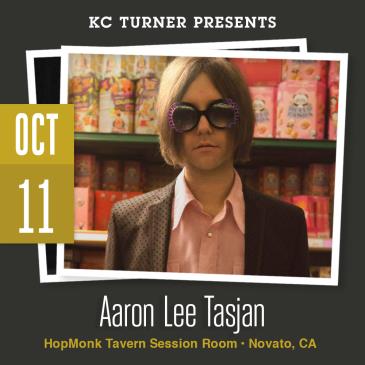