EARLY START: GATES 4pm | SHOW 5pm
SML Good Neighbors Presents ANA POPOVIC, ERIC GALES, & MIKE ZITO
You’ll find Ana Popovic in a select group of excellent modern blues guitar players. One reason could be the fact that she’s always willing to work a little harder and travel a little further to hone her craft. That dedication has resulted in twelve albums, two DVDs and six nationwide Experience Hendrix tours. She's called “one helluva a guitar-player” by Bruce Springsteen and nominated for seven Blues Music Awards nominations. Popovic has been electrifying audiences all over the world with her balance of blistering blues riffs and delicate jazz sensibilities. Amazingly charismatic and deliverer of the blues feels. We can’t get enough of Ana and neither should you!
Come grab a pair of tickets and enjoy this rocking night.Called “absolutely incredible” by Carlos Santana, Eric Gales has been releasing albums since 1991, when he was only 16-years-old. His blues and rock chops were formed with the help of his older brothers, who exposed him to the likes of Cream, Hendrix, Muddy Waters, and John Lee Hooker. Often associated with Hendrix because of his distinctive left-handed playing on an inverted right-handed guitar, Gales is worthy of praise for his solo jams and funky style.
Mike Zito may be one of the most lauded artists in the contemporary blues arena today, and rightfully so, but for Mike Zito, the thing that counts the most is maintaining his honesty, authenticity and integrity. Those are the qualities that have steered Zito’s career since the beginning and continue to define every effort he’s offered since.
Net proceeds to benefit SML Good Neighbors, Inc. 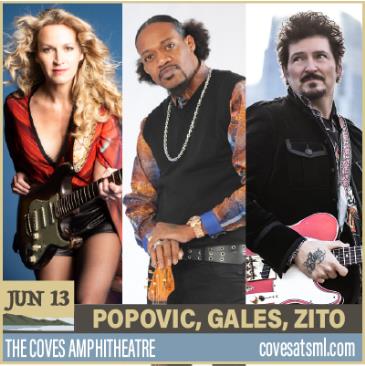