All My Friends Festival is taking over CONTROL Fridays at Avalon Hollywood on August 17th for an AMF pre-party! Taking control of the stage is headliners Chris Lorenzo and Graves, as well as local support from Frosty, Cody Bauer, GVRL, AUREO.

All the way from Birmingham, UK, bassline master Chris Lorenzo is bringing his innovative music stylings to Avalon. This producer has carved out his own genre of electronic music, blending bassline, tech/deep house, UK jackin’, and dubstep, creating what he simply calls “House & Bass”. Chris Lorenzo sets are known to get the party going, with deep drops and high energy beats.

Also headlining, is DJ and producer Graves, from Honolulu. This grammy owner has worked with Kanye West, but now takes the stage as Graves; a multi-genre artist who continues to produce mind-bending and beautiful tracks. Being in Honolulu keeps him from being influenced by opinions and trends, making him and his unique sound stand out among the growing monotony of mainstream electronic dance music.

Start off the AMF festivities the right way, by joining Chris Lorenzo, Graves, Frosty, Cody Bauer, GVRL, and AUREO! The AMF pre-party on August 17th at Avalon Hollywood is an event you won’t want to miss.

CLICK HERE to buy Aug 18+19 AMFAMFAMF festival tickets before they sell out.

JERRY LEWIS STAGE PRESENTED BY UP ALL NGHT (abc order): 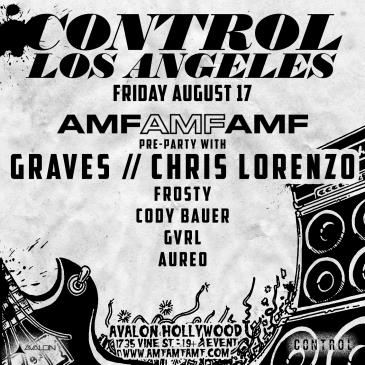