The Hottest New Joint is This!

* JusOneOh *
was raised in Hip Hop culture, starting as an emcee in Hawaii, evolving as a producer, making that boom bap on an ASR-10 in the late 90s, which went hand in hand with becoming a DJ as he went heavy digging for samples and breaks. He’s been DJing for the last two decades, traveling internationally as well as different parts of the U.S. DJing for B-Boy/B-Girl jams and also for local Hip hop events inthe Bay Area. He’s been down with Rock Force Crew and Horse power and continues to produce music and bless the cyphers with the funk.

Electronic and sample based music matured in the nineties and so did Mophono’s career in experimental electronic dance music DJ in the bay area. Mophono has released two full length albums and a slew of singles giving birth to two new genre’s Thug Jazz and Dirt Wave and a new standard in the record industry called Skip on Beat.

Inspired by 60’s psyche and experimental electronic music, Mophono is known for his destructive drum breaks and heavy and orchestral instrumental compositions.

* DJ TOURE *
“DJ Toure” Duncan is a renowned producer, DJ, and drummer from Oakland, CA. Beginning with Hieroglyphics, Toure has been instrumental in creating and evolving the Bay Area’s distinctively bass-heavysound.  As a beatmaker, Toure is both mentor and contender. The couch in his studio is well-worn, his catalog is bonafide, his hard drive is full of surprises. Seek and you shall find. His much-anticipated new album The Thesis will be released via Hiero Imperium and 101Percent Music. 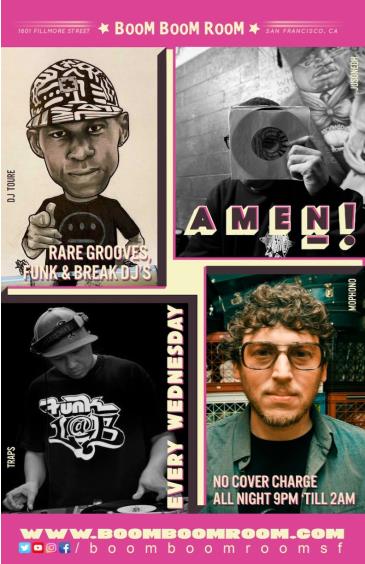