A. Savage, My Idea

21+. All attendees must be able to display full proof of Covid vaccination.

A. Savage is best known as the frontman for Parquet Court, a duty split with fellow Texan Austin Brown, and their last record,  Human Performance , delved into the emotional wreckage of a broken heart, to critical acclaim. But with Thawing Dawn, his first solo album which will be released on Dull Tools, it’s clear that Savage has matured. The songs on Thawing Dawn form a guided tour through the romantic environs of A. Savage’s mirrored mind. While some were written recently, other tunes were penned over the past decade. For one reason or another, these compositions didn’t land with any of Savage’s other groups, and instead are presented now as a distinct collection. Reflecting back, Savage says, “Once I realized I had a small body of work that didn’t fit anywhere else, I started to examine the commonalities: What’s the common denominator of all this and how I can expand on it?”

These ten songs were recorded between December 2016 and June 2017 by a cast of friends in Jarvis Taveniere’s Thump Studios in Brooklyn. Members of Woods, Ultimate Painting, PC Worship, EZTV, and Psychic TV all lend their talents. Savage’s voice, once shouted into mosh pits, now glides confidently above its backing band. While assembling the record, he fell in love. Now, for the first time, we hear songs about being on the inside of love. Rather than lamenting the end of a relationship, we hear a voice trying, in the moment, to make sense of love’s mysteries. “Part of this maturity,” he says, “is reflecting on something when it’s happening, not just when it’s gone.”

Throughout, A. Savage delivers one-off lines of razor-sharp observation that will stick in your brain, only to surface when you’re least prepared to handle their insights. When you put your copy of Thawing Dawn on your turntable and drop the needle, you’ll learn what A. Savage has to say about romance in our modern world.

For Lily Konigsberg and Nate Amos, music has always been the plan. “I wrote a song in a pool in Florida when I was two”, explains Konigsberg, humming the melody over video chat, and Amos nods in agreement, “when I was four I wrote one called “like a cat” about how my girlfriend sleeps at the foot of the bed like a cat”. Though they’ve both been pulled toward songwriting since a young age, it’s a miracle they ever ended up doing it together.While Konigsberg is a Brooklyn lifer, Amos’ family bounced around from Colorado to Pennsylvania and eventually Vermont. At some point, he up and left to Chicago, looking for a change of scenery. “I was just bored, I still am”, he says of the decision, which might also explain the immense volume of recording projects (roughly 250) that he worked on during his four year stint there. Eventually he ended up in New York to start the avant pop band Water From Your Eyes, and before long, had crossed paths with Lily.After years performing with her experimental punk group Palberta, Konigsberg was beginning to carve out a solo career, and thought Amos could be a potential producer. What began as a trial session for her debut album quickly devolved into a songwriting competition, with the two churning out dozens of tracks over the Fall of 2020. “Lily became the lyric supervisor and I became the music supervisor”, explains Amos, “the roles emerged”. With such undeniable chemistry, it was only logical that they form a band, the hilarious and perfectly named My Idea.On their debut EP, the duo pack their immense personalities into bite sized pop experiments. “Stay Away Still” delivers tongue-in-cheek lines like “depressions a conspiracy theory” over tightly wound indie rock, while “Birthday” immediately pivots into icy glitchiness, pitting pulsing drum & bass against glossy vocals. There’s an economy to their songwriting, every production choice and lyric pulling you into their world without ever becoming overwhelming. Lyrics like “God is great and music’s better” feel like a revelation on “Stay Away Still”, and the piano arpeggios on “Keep Lyin To Me” build the tension to a boiling point before erupting into autotuned euphoria.Their union has been described by friends as “watching two planets collide”, and their 13-minute debut feels like watching a universe only begin to expand. That’s My Idea is expected July 30th via Hardly Art Records. 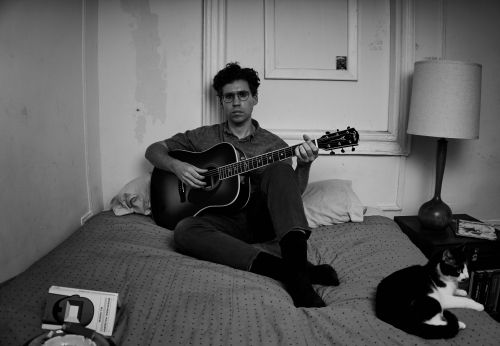