A Day to Remember

Since their formation in 2003, Ocala, Florida’s A Day To Remember have grownfrom a small band with a dedicated local fan-base into a worldwide phenomenon,gaining the respect and adoration from their peers as much as their fans.

Overthe course of the band’s career, they have sold out entire continental tours,landed two Top 25 Billboard debuts and topped the Billboard Indie AlbumsCharts. The band has sold over a million albums. The band’s most recent LPCommon Courtesy was released on the band’s own label, ADTR Records, in late2013.Self Help, the rock festival curated by A Day To Remember, will return to SanBernardino, California on March 19, 2016 with a lineup headlined by ADTR andalso featuring a reunited Underoath.

The first Self Help, also headlined by A DayTo Remember, was held there in March 2014 with more than 12,000 fansattending. A Day To Remember followed this up with a sold out east coastversion in Philadelphia attended by 10,000+ in October 2014 and a second westcoast version in March 2015 co-headlined by Pierce the Veil and Sleeping WithSirens.

In the summer of 2015, A Day To Remember played numerous festivals acrossEurope including Download Festival’s main stage, Rock am Ring/Rock im Parkand Graspop. They ended the summer at Milwaukee’s Summerfest with a mainstage performance alongside Linkin Park before being named the Best Live Bandat the Alternative Press Music Awards.

2015 for the band will end with a co-headline tour of Australia with The AmityAffliction dubbed the Big Ass Tour! 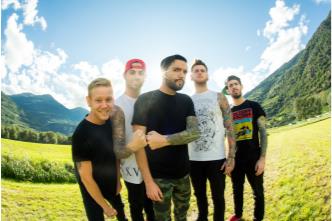 A Day to Remember