2019 Cigars Under the Stars

Cigars Under the Stars fundraiser will be held on Saturday, November 2nd at 6:00pm at the Los Angeles Police Museum, 6045 York Blvd, Los Angeles, CA,90045.  Built in 1925, The Highland Park Police Station is a Historical National Landmark.  LAPD Northeast Division used the station until its closure in 1983.  This year's fundraiser is a 1920’s themed party.  Live music from the 1920’s to 1940’s will be played by The Retro Swing Big Band.  A buffet dinner will be served, complementary cigars, dancing, admission to the Los Angeles Police Museum, a no host bar, live auction, silent auction, and a raffle.  Ladies, come dressed in 1920’s period evening wear and receive a raffle ticket for a spa day for two.  Overflow parking is available with complimentary shuttle service.

Bees Knees Sponsor: $2,500.00  Table of ten,full page ad in the program, sponsorship logo on the Band’s web site with a link to the sponsor.

Hotsy-Totsy Sponsor: $5,000.00  Table of ten, full page ad in the program, sponsorship logo on the Band’s web site with a link to the sponsor, sponsorship banner at the event, and three bottles of premium wine at your table.

The Cigars Under the Stars is a fundraiser for the Los Angeles Police Emerald Society Pipes and Drums.  The Band is the official bagpipe band for the Los Angeles Police Department.  We also play for the majority of the law enforcement agencies in the Southern California area and the military.  We perform at funerals, memorials, recruit graduations, and ceremonies when requested. During National Police Week we perform in Sacramento at the California State memorial ceremony and in Washington DC at the national ceremony.  The Band is a nonprofit public charity under IRS Tax Code 501(c)(3)  EIN 27-3941723.

For further information please send an email to: piperlapes@gmail.com

Thank you for your support. 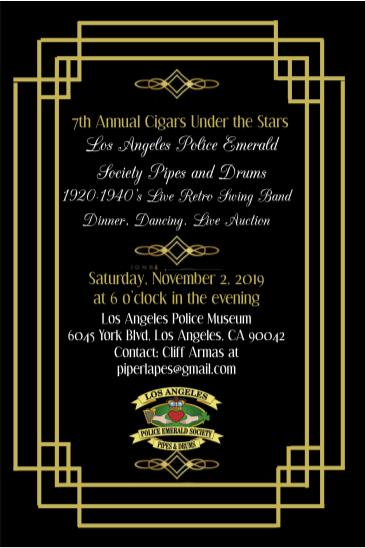 Show Map
View 6045 York Blvd in a larger map
We use cookies to provide you with the best experience possible. By using See Tickets, you accept our cookie policy.
Accept
ftr1:0