12th Planet is theelectronic music pioneer whose off-axis beats and subsonic frequencies orbit onthe forefront of global bass culture. Recently named “Los Angeles dubstep god”by Rolling Stone, 12th Planet AKA John Dadzie and his influential label SMOGRecords are widely credited for bringing the British movement stateside, andcontinue to be a crucial force in the evolution of electronic music. 12thPlanet’s DJ sets now include a myriad of styles that reflect the current,diverse landscape of EDM music and continue to display his role as an essentialtastemaker in the dance music world.

12th Planet burstonto the scene in 2006, releasing tracks that helped ignite the North AmericanEDM explosion and collaborating with the likes of Skrillex, Kill The Noise,Datsik and Plastician. In 2012, 12th Planet’s seminal track “Reasons” (Doctor PRemix) was named by SPIN Magazine as one of the ‘30 Greatest Dubstep Songs ofAll Time’ — after all, “nothing set the tone for domestic bass culture quitelike this Planet’s orbit,” said SPIN. 12th Planet has gone on to be recognizedas “King of Dubstep” by SPIN and “US dubstep godfather” by UK’s dance musicbible Mixmag after headlining tours across the globe and performing at majorfestivals including Coachella, Electric Daisy Carnival, Ultra Music Festivaland more.

Since 2006, 12thPlanet has also led what’s become one of the most thriving undergroundmovements in electronic music, with MTV calling the crew a “pioneeringincubator of bass music in America.” The SMOG crew, with 12th Planet at thehelm, continues to produce top quality events in Los Angeles and beyond, alwayspushing forward as an internationally recognized leader in U.S. bass music.However, John Dadzie’s role has extended beyond just bass music to encompassthe whole of EDM, including what he recently described to OC Weekly as“transition music,” — a sound that incorporates diverse styles and BPMs. His DJset is no longer classifiable by genre but best dubbed “a trip to the 12thPlanet and back.” 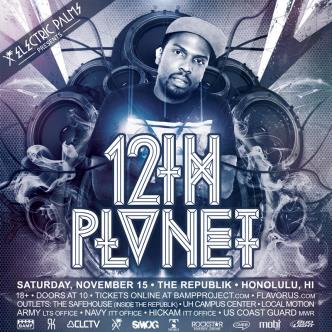