Techno/Pop band Ruki Vverh (translated "HANDS UP") was created in '94 when lead singer Sergey Zhukov and Alexei Potekhin moved to Moscow to promote their music.

The band became very popular quickly sold out every concert. They topped the charts in the late 90s playing 40 concerts a month and touring all over Europe.

In 2010 the group temporarily disbanded. Each of the singers went on to start their own family. Today, Ruki Vverh has reunited and is making a comeback. 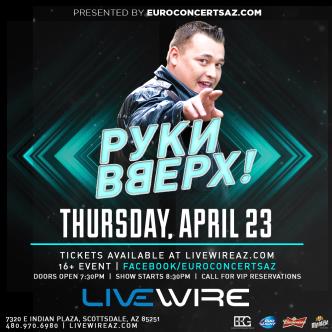